Description
5.75 inches long. The Alder Flycatcher is a small flycatcher but relatively large when compared to other members of the genus Empidomax. It has a narrow white eye ring and a wide, dull yellow-orange lower bill. The upperparts are brownish-olive. The throat, belly, and undertail are whitish. It has white wing bars. This is one of five small “Empids” (Empidonax Flycatchers) that may show up in the Forest. It is best identified by its call. Differences in plumage due to molt, wear and age make the plumage quite variable. This species is extremely similar to the Willow Flycatcher (Empidonax traillii). It often has a more noticeable eye ring. Acadian (Empidonax virescens) and Yellow-bellied flycatchers (Empidonax flaviventris) tend to be greener above and yellower below than the Alder Flycatcher. The Least Flycatcher (Empidonax minimus) is grayer above, smaller, shorter-tailed and has a more distinct eye ring.

Occurrence
The Alder Flycatcher is an uncommon migrant through the area. In spring it appears from mid May through early June and in fall during September.

Comments
The Alder Flycatcher was formerly considered conspecific with the Willow Flycatcher. The two together were referred to as Traill’s Flycatcher until 1973, when they were recognized as separate species. The Alder is the northern cousin of the Willow. Alder Flycatchers are late spring migrants. The Alder Flycatcher is primarily an aerial forager, capturing most of its insect diet on the wing. Willow and Alder flycatchers are basically indistinguishable except by voice. Call of Alder usually an emphatic pip or pit, whereas Willow a liquid whit. Alder Flycatcher has a harsh, burry song with strongly accented second syllable, traditionally described as a 3-syllable fee-BEE-o, but which may be heard as a 2-syllable free-BEER, with the third syllable faint, indistinct. The Willow Flycatcher song is strongly accented on first syllable and traditionally described as FITZ-bew. 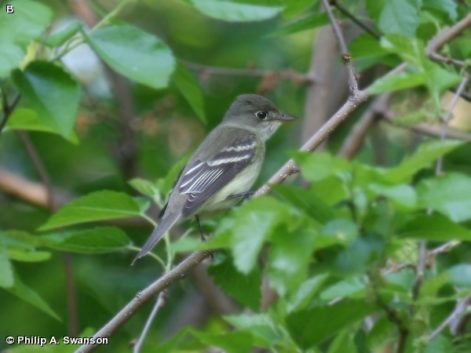 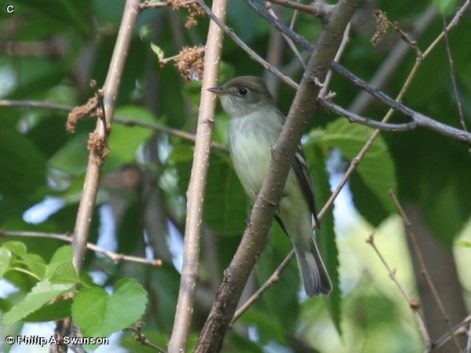 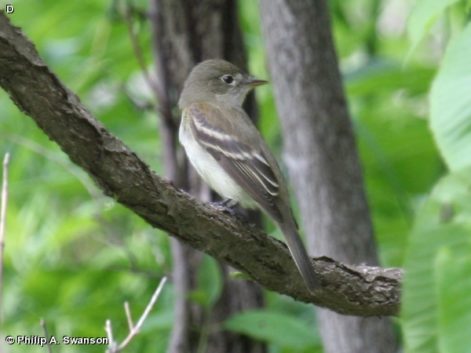