Description
This buffy-grey dog-like predator can weigh up to 50 pounds and can be up to 50 inches long, if one includes the tail. It has somewhat longer legs than the red fox and keeps its tail between its legs when running – the fox’s tail has a white tip and is held horizontally when running. The 3rd image shows a couple of footprints about 2 1/2 to 3 inches long (measured in relation to Dollar Bill), taken on Marsh Trail after a rainy night.

Occurrence
Occasionally seen or heard in Fontenelle Forest, especially during winter – they mate in January to February. Coyotes seem to be seen more in the uplands since the flooding of the flood plains in 2010 and 2011.They are usually more abundant near farms on the flood plains. They mostly hunt at night, but coyotes can be seen anytime during the day as well.

Comments
The coyote has been hunted relentlessly over the years, mostly by farmers, for whom they represent a danger to their small animals. So they have become quite wary. They mostly hunt small mammals, but also eat dead deer and other larger animals, those killed by trains, for instance. 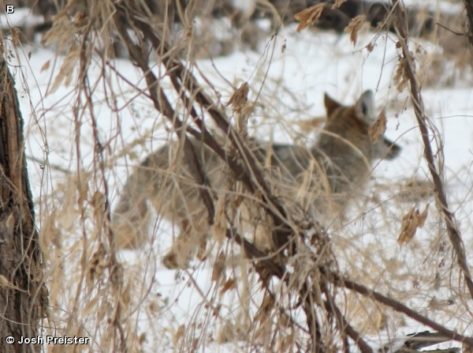 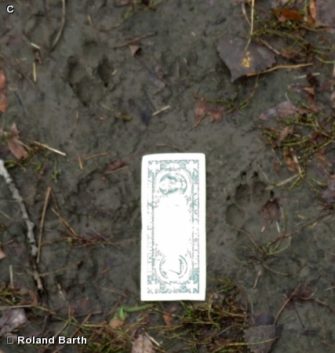