Description
This slime mold is a white mass encrusting the stems of trees or grasses. At first it resembles dog’s vomit, but within 24 hours the spores mature and then it is more often mistaken for insect eggs. This slime mold was identified with the help of Dr.Allen Weber a mycologist at the Univ. of Nebraska Omaha and Dr. David Sutherland a biologist also at UNO. The spores were necessary to help identify it.

Occurrence
This slime mold appears to be fairly common throughout Fontenelle Forest and probably Neale woods. This photo was taken on South Stream Trail. The slime was probably on a cottonwood tree. In the year following the large flood of 2011 many trees in the wetlands were found to contain this slime. 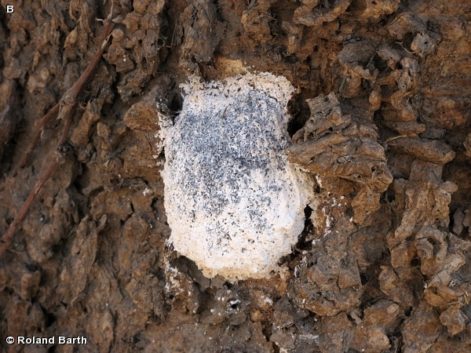 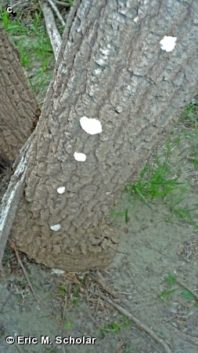