Description
Opossums are nocturnal and are not often seen during the day. They have a rat-like appearance with pointed heads and bare tails. Opossums don’t hibernate during winter and are more often seen in January when they seek out a mate. Opossums are solitary; they find the opposite sex mostly by scent. The female bears up to 20 tiny young about 13 days after mating. As with other marsupials, the tiny young crawl up their mother’s abdomen to attach themselves to one of her 13 nipples. There they are continually attached to and feed on this nipple for the next 60 days. The young are weaned in about 90 days and may then be seen hanging on to their mother’s fur. The female abandons its litter by autumn.

Occurrence
Opossums are probably common in Fontenelle Forest and Neale Woods, but are not seen that often since they are mostly nocturnal. This is a very adaptable species and often lives near habitation. When seen, they most often move slowly or amble along. But they can also climb trees.

Comments
The opossums are known to “play dead” when threatened. But they actually slip into a catatonic-like state which may last for hours. This may sometimes save an individual from being killed. 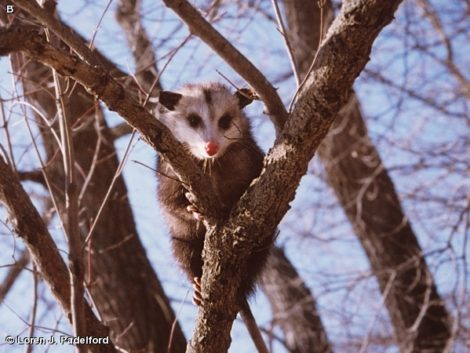 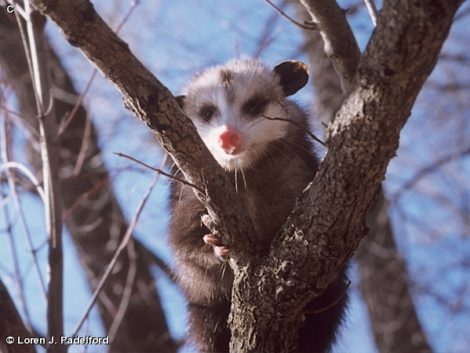 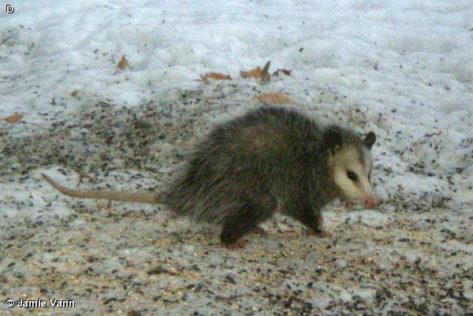