Description
33 inches long – Male. 21 inches long – Female. The Ring-necked Pheasant is a chunky, long-tailed, round winged, ground dwelling bird. It has a small head and thin neck. The male Ring-necked Pheasant has spectacular multicolored plumage that is difficult to confuse with any other North American bird. The adult male has a green head and pale bill and unfeathered red facial skin around the eye. There is a white ring around the neck. The body is golden plumaged with blue and green iridescence and black spots scattered throughout. The tail is very long and pointed with golden feathers that have black barring. The legs are spurred. The adult female is quite different. She is mottled brown. The back is dark brown with paler edges and centers. The tail is long and brown. She does not have spurs.

Occurrence
The Ring-necked Pheasant is a common year round resident in the Omaha area and somewhat uncommon in the Forest.

Comments
The Ring-necked Pheasant was originally a native of Asia and has been introduced in North America. It is an exceptionally popular game. It is a swift runner and strong flyer for short distances. The Ring-necked Pheasant does best in hay and grain agricultural regions. Food and predation are important influences on population levels. Dense winter cover (such as cattails in wetlands) is especially important for survival during years with severe cold, wind, and heavy snowfall. Numerous nests are also destroyed annually by hay-mowing. 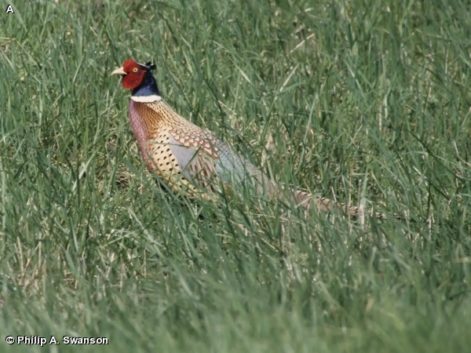