Description
This is a pink to red cup or goblet shaped fungus covered by long conspicuous white hairs on the outer surface. The inner part of the fungus is bright red and smooth. The cup is ¼ -3/8 of an inch wide. The stalk is 1-2 inches long.

Occurrence
This fungus is found clustered on decaying hardwood branches and buried wood. It fruits from June through August. In Fontenelle Forest it is rare having been seen once on Hackberry Trail.

Comments
No other fungus looks like it with its long stem and dense white hairs over a scarlet cup It is also known as Sarcoscypha floccosa . Although it is small it is typically found in conspicuous clusters. 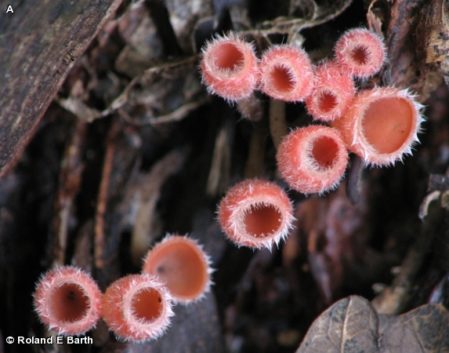