Description
The Variable Oakleaf Caterpillar Moth has a wingspan from 1.50 to 2 inches. The forewing is dusty gray with a dark, smudgy gray patch in the median area. The scalloped double antemedial lines are often filled with pale scales. The reniform spot is usually white with a thin, black crescent in the center. The hindwing is brownish gray in the subterminal area and gray in the remainder of the wing. The caterpillar, true to the name, is highly variable in color and patterning. It is usually pale green, but can have red saddle-shaped markings or can be entirely red. There is a bold white stripe over the eye outlined with a black line above. It grows to 1.75 inches. The caterpillars may be difficult to distinguish from Double-lined Prominent caterpillars.

Occurrence
The frequency of occurrence in Fontenelle Forest and Neale Woods is not known, but this moth can be very common in some years in the northeastern U.S. It has been photographed once at Fontenelle Forest Nature Center in late August 2015. Adults fly mainly from August to September.

Comments
Larvae feed on many deciduous trees, but primarily oaks in this area. The caterpillars should not be handled because they can spray formic acid which has been reported to cause blisters.

Disclaimer: The content of NatureSearch is provided by dedicated volunteer Naturalists of Fontenelle Nature Association who strive to provide the most accurate information available. Contributors of the images retain their copyrights. The point of contact for this page is: Babs Padelford. 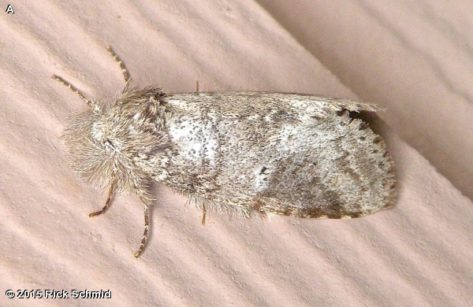