Description
8.75 inches long. The Western Kingbird is a medium-large sized flycatcher with a large head and relatively large bill. It has greenish-gray upperparts and a lemon yellow lower breast. The throat and upper breast are pale gray. Its head is pale gray with a dark eye line. There is a small orange-red patch on top of the head that is usually concealed.The tail is dark and unforked with white outer tail feathers that may be difficult to see.

Occurrence
The Western Kingbird is a common summer resident and breeder in the Omaha area that is occasionally seen in the Forest. It shows up by late April and leaves by late September.

Comments
The Western Kingbird is a conspicuous bird that occupies a variety of habitats including riparian forests and woodlands, agricultural lands, and urban areas. key features of its breeding habitat include open areas for feeding and trees and shrubs for nesting and perching. Human made structures such as utility poles are also used for nesting. Typical of tyrant flycatchers, this kingbird forages by aerial hawking and perch-to-ground flights, often with acrobatic flying maneuvers. Insects make up the majority of its diet. This species was originally known as the Arkansas Kingbird. The Western Kingbird vigorously defends a small territory around its nest. Males are most active in defense, using a harsh buzzing call during attacks. Several non-vocal displays, such as bill-snapping and raising and revealing the red crown feathers, are seen during aggressive behavior. The call of the Western Kingbird is a sharp “whit”. There is also a bickering chatter of “ker-er-ip, ker-er-ip, pree pre pr-prrr.” 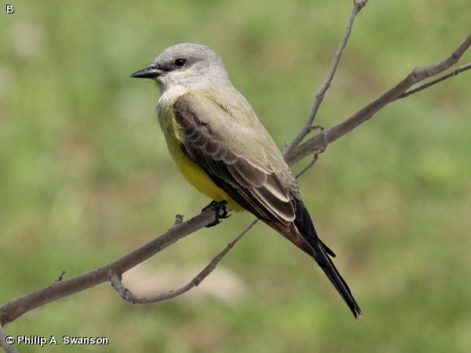 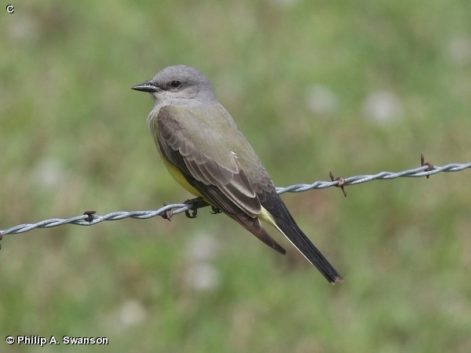