Description
5.5 inches long. The Yellow-bellied Flycatcher has yellowish underparts and an eye-ring. It is a small to medium bird, with a relatively short tail, short but wide bill, large head, and fairly long wings that give it an overall stocky appearance. The cheek blends into the lighter throat with less contrast than other Empids. The throat has a slight yellowish wash. The breast is yellow-olive with a darker breastband. Adults are uniformly olive green above, with the head somewhat darker. The head is fairly rounded to slightly crested when excited. The lower bill is pinkish-yellow with no dark tip. The eye-ring is narrow, complete, and rounded or somewhat almond-shaped. There are two broad lemon or whitish wing-bars that contrast sharply with the rest of the wing.The wing bars are buffy in immature birds. Fall birds have yellower underparts than spring birds. This is one of five small “Empids” (Empidonax Flycatchers) that may show up in the Forest. It is best identified by its call. Differences in plumage due to molt, wear, and age make the plumage quite variable. Some Yellow-bellied Flycatchers can be safely identified by a combination of features: size-they are smaller than all but the Least Flycatcher (Empidonax minimus) with a short tail and small bill that gives them a big-headed look, and plumage-they are greener above and yellower below than all but the Acadian Flycatcher (Empidonax virescens). Acadian Flycatchers have larger bills, longer tails, less yellow on the throat and are less active. Willow Flycatchers (Empidonax traillii) and Alder Flycatchers (Empidonax alnorum) appear longer-tailed, have less obvious eye rings and are browner above and whiter below. Least Flycatchers (Empidonax minimus) are grayer above and whiter below.

Occurrence
The Yellow-bellied Flycatcher is a rather late migrant that is only occasionally seen in the Forest. Since it is one of the later migrants that come through when the trees are fully out, it may be more common in the Forest than is reported. Dates seen are generally mid to late May and then again in September.

Comments
The Yellow-bellied Flycatcher more often heard than seen. It was one of the continent’s most overlooked birds and one of the last ones to be discovered. As the genus name indicates, this Empidonax flycatcher is truly a “king of the gnats” as well as of innumerable mosquitoes and other flying insects. The song of Yellow-bellied Flycatcher is a soft “che-bunk”. It is less abrupt, and is heard at a less frequent interval than the “che-bek” song of Least Flycatcher. 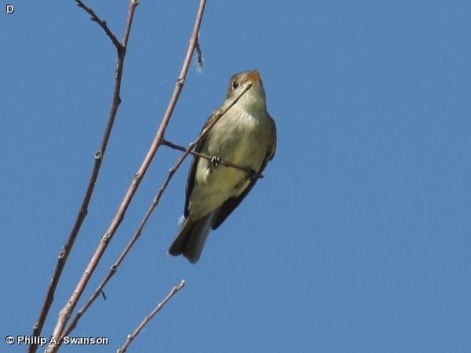 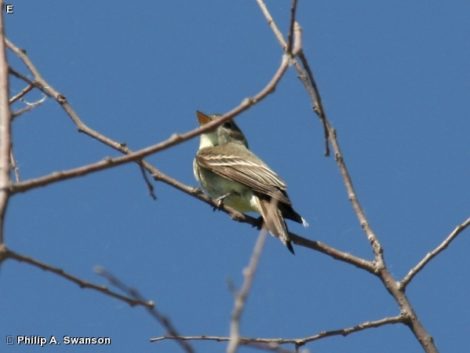